The key to a successful business in the current economic recession is not lower prices – it’s loyal customers. Here at ETHOZ, we believe in cultivating strong customer relationships by providing outstanding customer service. What our clients say about us: https://www.ethozgroup.com/testimonial/

Recent advancements has seen a shift towards the utilisation of artificial intelligence technologies such as automated machines to reduce customer fall outs and response time. However, the attribute of human touch remains invaluable in complicated situations that require individualized attention. In addition, customer service can often involve emotions. The need for someone to empathise and possess the drive to go above and beyond relentlessly to better the experiences of their customers is vital. United Airlines displayed a heartening example:

Kerry Drake got the news on the morning of January 24 that his mother, who had been ill for years from rheumatoid arthritis and had been especially sick the last four months, was dying.

To get to his mother in Lubbock, Texas, the San Francisco resident booked a United Airlines flight, with only 40 minutes between connecting flights in Houston. When his first flight was delayed, Drake thought he would miss his connecting flight to Lubbock, the last one of the day.

He started crying, obviously distraught. The flight attendants brought napkins for his tears, said they would do what they could to help, and most importantly, got his connecting flight information to the captain, he told CNN.

When he got off the airport train and was running toward the gate, “I was still like maybe 20 yards away when I heard the gate agent say, ‘Mr. Drake, we’ve been expecting you,'” he said.

With the information from the flight attendants, the captain had radioed ahead about Drake’s situation, and the Lubbock crew had delayed departure to get him on board. Until that point, Drake had been rushing on adrenaline to make the flight. Finally sitting on that second airplane, he realized how much had gone into helping him get on that plane. “I was overcome with emotion,” he said.

Even his luggage arrived on time. The Houston ground crew made sure of it.

He made it to the hospital in time to see his mother. “At one point she opened her eyes, and I think she recognized me,” said Drake, who spent the night at the hospital. “

She died that morning.

“This almost never happens,” wrote Christopher Elliott, who first told Drake’s story on his airline consumer advocate website, via e-mail. “Airline employees are evaluated based on their ability to keep a schedule. Airlines compete with each other on who has the best on-time departure record. When the crew on this flight heard about this distraught passenger trying to make his connection, they must have said, ‘To hell with it’. And they made the right call.”

Nobody knows more about your business than your customers. Make it a point to be available to listen to your customer with convenient “Contact us” avenues such as social media platforms and web forms.

‘The most important thing in communication is hearing what isn’t said.’ – Peter Drucker

Attentiveness extends beyond listening to what your customers are saying. Some customers may not explicitly express or even realise what they truly need, but much can be inferred through paying mindful attention to their actions and feedback. Being sensitive to your customers’ needs puts you in a position to initiate improvements before a request is made, showing your customers that their welfare is constantly prioritised. An example of how attentiveness can make an impact on your customers:

Kirk Alexander of Salem, Oregon was a loyal Domino’s Pizza customer. So loyal, in fact, that when he didn’t place an order at the restaurant for almost two weeks, the eatery’s staff got worried.

Sarah Fuller, the general manager at a Salem-area Domino’s, said that Alexander, 48, had been a regular customer since 2009.

“He orders every day, every other day,” Fuller said. “His order pops up on the screen because he orders online. So we see it come across the screen and we’re like, ‘Oh, Kirk’s order.’”

But last week was different. Several days passed without a single order from Alexander.

“A few of my drivers had mentioned that we hadn’t seen his order come across our screen in a while,” Fuller said.

When she checked the restaurant’s database, Fuller discovered that it’d been 11 days since Alexander’s last order, “which is not like him at all,” she said.

On Sunday morning, Fuller asked longtime delivery driver Tracey Hamblen to visit Alexander, who neighbors said rarely left his home. But when Hamblen arrived at Alexander’s house, he knew something was amiss. The lights were on and the TV was playing, but Alexander didn’t come to the door. He also didn’t pick up the phone.

According to the sheriff’s office, deputies heard a man “calling for help from inside the residence” when they arrived at the scene. Upon entering the home, they found Alexander, who reportedly suffers from severe health issues, in “need of immediate medical attention.”

Alexander was whisked to the hospital, where he recovered.

The Domino’s crew was widely praised on social media for their life-saving actions. Fuller, however, insisted that the team was just doing their job.

“[Alexander is] just an important customer that’s part of our family here at Domino’s. He orders all the time so we know him. I think we were just doing our job checking in on someone we know who orders a lot. We felt like we needed to do something,” she said.

Having an in-depth knowledge of your products, especially how a customer uses it on a regular basis, lays the foundation for adaptability. Most companies offer a pool of products. Rather than trying to upsell all the products at large, a thorough understanding of the customer’s needs at various points in time allows you to pull a particular product from the pool at the golden timing. This maximizes the benefits of the product for the customer. Here is a story of employees who knew their products well, understood the value of their products to their customers at the given point in time, and possessed the tenacity to deliver exceptional customer service.

An elderly man, 89 years of age, was snowed in at his Pennsylvanian home around the holidays, and his daughter was worried that he wasn’t going to have access to enough food due to the impending storm and bad weather in the area.

After calling multiple stores in a desperate attempt to find anyone who would deliver to her father’s home, she finally got hold of someone at Trader Joe’s, who told her that they also do not deliver…normally.

Given the extreme circumstance, they told her that they would gladly deliver directly to his home. The staff even suggested additional delivery items that would fit perfectly with his special low-sodium diet.

After the daughter placed the order for the food, the employee on the phone told her that she didn’t need to worry about the price; the food would be delivered free of charge. The employee then wished her a Merry Christmas.

Less than 30 minutes later the food was at the man’s doorstep–for free!

In refusing to let red tape get in the way of a customer in need, Trader Joe’s shows that customer service doesn’t need to be about the fanfare, it can simply be about doing the right thing.

The last thing you want to hear from your customer service officer is:

“I’m not sure…I’ll have to ask someone”

“That’s not under my port but I’ll make sure it’s well taken care of by my colleagues in the relevant department. “

A tone of authority gives customers the assurance that their issues will be taken care of. If you come off as passive or having to consult a higher authority, your customers will find it hard to place their faith in you. Of course, make sure you deliver on your promises to seal the deal. A store manager did just that by stepping beyond the boundaries of his job scope and kept his promise to his customer for a lifetime. 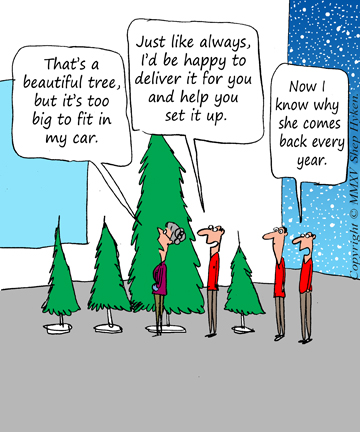 An elderly lady was visiting the Ace Hardware store in Dunedin, Florida, looking at Christmas trees around holiday time. The trees were lined up in front of the store, and the store manager, Jeffrey Gawel, was helping her choose one. She spotted a tree and said, “Boy, I’d sure love that tree, and I know it would look great in my living room, but it’s just too darned tall for me to decorate at my age. It’s too big to carry into my apartment, and I’m not going to make my way up a ladder to decorate the tree. I’m just too old for that.”

The woman was just vocalizing her thoughts. She wasn’t really asking for his help. So you can imagine her surprise when the manager said, “Oh, that’s no problem at all. I’ll be happy to deliver it to your home, and even help you decorate it.”

Sure enough, Jeffrey delivered that tree to his customer’s home. The woman had boxes of cherished mementos and ornaments to decorate the tree with. And here is the amazing part of the story. The next year he did it again. It became a tradition. For nine years this woman would come by the store, pick out the tree, and it would be delivered that evening. Nine years!

As they decorated the tree, the woman would tell stories. Jeffrey joked that he had to listen to same ones over and over each year. She served him a piece of banana bread and a Diet Coke every time. He said it was like spending time with a new grandma.

This tradition finally ended when his friend passed away in her eighties. At the funeral there were only ten people, and he was one of them.

She had told all of her neighbors about Jeffrey and the special time they had together. This manager had become much, much more than a hardware store manager. He became more than just a friend. It was like he was family. All because he was willing to do a little something extra to take care of his customers.

A tasteful sense of humor makes people smile and creates a memorable experience. When approaching a potentially stressful customer service interaction, customers may feel apprehensive. The right dose of humor can break the ice and set the tone for a mutually enjoyable customer service experience. The exchange between an Amazon Customer Service Officer and a customer below is a Marvel-lous example of humor well-executed.

All in all, it is about always putting your customer first. Businesses should be built around delivering remarkable customer service. One doesn’t have to do extravagant things to wow your customers, but stepping up in times of need affirms them that they are in good hands. It is the knowledge that you care which keeps your customers coming back, time and again.