Strange Driving Laws from Around the World

When you’re in an unfamiliar area, it can be tricky enough to drive on the opposite side of the street and convert kilometres to MPH. Factor in odd laws and it’s enough to make any person want to stay home. Here are a few strange driving rules to follow when you’re in brand new territory.

A good rule of thumb is to always look up the laws before embarking on your trip, from crossing international borders, etc. For example, if you are intending to rent a car, you will need an International Driving Permit (IDP) – valid in 150+ countries – is recommended, as it can help to expedite encounters with authorities in the event of an accident or traffic infraction.

In Singapore, you can obtained you IDP from the Automobile Association of Singapore(AAS) for around SGD$20.00.

In the U.S., IDP’s may be obtained from the American Automobile Association (AAA) for around $15.00.

In the U.K., they can be obtained from the Automobile Association (AA) for a fee of £14.00 plus £3 for processing by mail.

In Ireland, a £15.00 fee includes postage & handling by the Automobile Association (AA).

As part of The Metropolitan Streets Act 1867, it is illegal to drive cows down the roadway without the permission of the Commissioner of Police.

Raising your fists in a bout of road rage can get you fined for 25 euros. The law states a driver can be fined if the person “is in an irregular position inside the vehicle or raises his hand from the steering wheel unnecessarily.”

In Luxembourg, it is compulsory to fit all cars driven in Luxembourg with winter tyres when driving in snow or icy conditions, whatever the date or season.

In Russia, you will be fined if you’re driving a dirty car. The charge isn’t high, but to a traveller, even a measly $60 is a lot to unexpectedly pay.

According to Telegraph, in Germany, it is illegal to drive without winter tyres at certain times of the year.

In Spain, according to the Dirección General de Tráfico via Expatica,

According to Telegraph, it is illegal to drive without headlights, even in daylight, in Scandinavia.

In Estonia, like Scandinavia, cars must keep headlights lit throughout the day. This is applicable all year round.

According to Telegraph, in Belarus, it is illegal to drive a dirty car.

In Turkey, it’s all about safety. Drivers must carry a fire extinguisher, reflective triangle and first-aid kit. Failure to do so may result in a police fine.

Drivers of all motor vehicles must carry a breath analyser. If you don’t show the gendarme your kit when asked, you will get an €11 fine.

According to Telegraph, all cars in Serbia must have a tow bar and a three-metre tow rope.

According to Newly Swissed, local Swiss laws prohibit the use of a car high pressure cleaner, also, there is the concern that the grease, oil and detergent would pollute the ground water and in turn the environment as well.

When in Sweden, it’s a legal requirement to keep your headlights blaring around-the-clock. This is especially weird during June, when the sun doesn’t even set in certain parts of the country!

According to Telegraph, it is forbidden to pick up hitchhikers in Russia.

The travel section of AOL says that in Manila, people can’t drive in certain areas based upon what day of the week it is and the last digit on their license plate. If a car’s plate ends with a 1 or a 2, the driver can be fined if caught driving in congested areas during certain times.

Splash a pedestrian with rainwater puddle while passing by and you can expect a fine of about $60. Apparently, enforcement of this law goes up during the month of June, when typhoons tend to leave a lot of standing water on roadways. 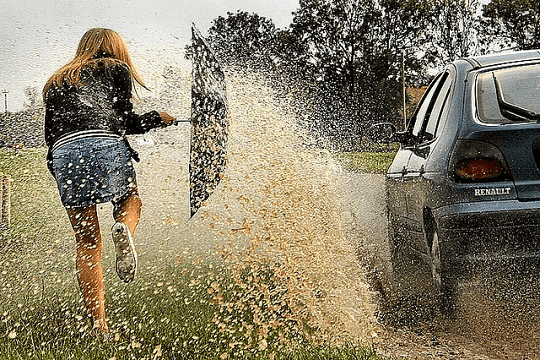 According to Yahoo, this popular Asian destination requires male and female drivers to keep their shirts on, regardless of how hot it is may be. This goes for operators of cars, buses, or “tuk-tuk cabs” as well.

In Singapore, jaywalking is defined as crossing the road within 50-meters (164-feet) of a crossing zone. Jaywalkers can receive a $20 fine on the spot, a fine of up to $1,000, or three months of jail time. The punishment for Jaywalking in Singapore doubles to a fine of up to $2,000 and six months in jail if you’re caught jaywalking twice.

In Beijing, pedestrian crossings are not observed by vehicles usually, with pedestrians often left standing on a crossing with vehicles weaving around them.

In recent developments, China is cracking down on jaywalkers, issuing 10-yuan fines to those who ignore red lights or traffic co-ordinators, and 20-yuan fines to cyclists for similar violations.

In South Africa animals have the same right to the roads as motorists do. Drivers face heavy fines of up to $500 if they do not slow or stop for passing livestock. 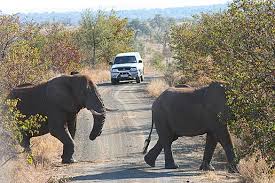 According to Fox News, it is illegal for a driver to be blindfolded while operating a vehicle.

In California, it is illegal to jump from a car at 65mph.

Also, no matter how luxurious comfortable that divide highway may look, it is illegal to use a road as a bed. The offense, should you live to be penalized for it, is classified as a misdemeanour and punishable by a fine up to $1,000 and/or up to six months in jail.

In Connecticut, it’s illegal to hunt from a car or an all-terrain vehicle (ATV). Another act that seems extremely dangerous is hunting from a moving vehicle (not to mention unsportsmanlike). To prevent this from happening, Connecticut passed a law prohibiting hunting or shooting from a vehicle. This law extends to ATVs as well, even if the vehicle is painted bright orange. So if you plan on hunting, expect to travel on foot the old fashioned way.

According to CNBC, in Kansas, it is illegal to screech your tires. That’s a state law, but there are also local ordinances to back it up. The penalty is a fine up to $500 and/or imprisonment up to 30 days.

Make sure your canine does not harbour a weird fetish for tailgating lights. You will be fined if your pet molests a vehicle. The penalty is a fine of up to $500.

Don’t park in front of Dunkin’ Doughnuts while in Maine! The penalty is a fine of up to $175 and/or jail time of up to 30 days. 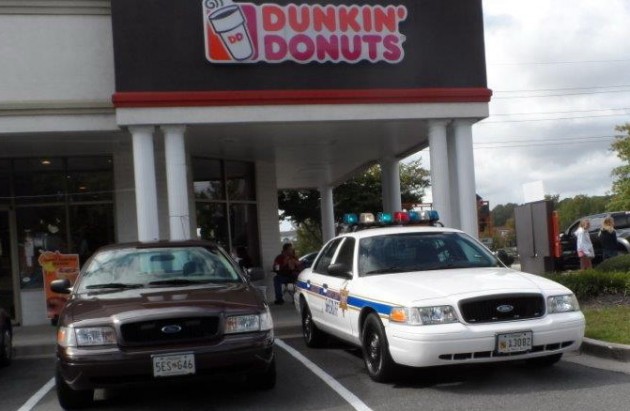 In Rockville, Maryland, it is illegal to swear within earshot of other people, whether you’re on a street, sidewalk or highway. The penalty is a fine up to $100 and/or jail time up to 90 days.

In Montana it is not permitted to leave a sheep unescorted in a truck.

In Minnetonka, Minnesota, you have to keep your car clean! It is considered a public nuisance, and therefore “illegal for a truck or other vehicle whose wheels or tires deposit mud, dirt, sticky substances, litter or other material on any street or highway.”

All violations of the Minnetonka code are subject to fines up to $2,000.

Hanging something from the rear-view mirror can be against the law, and a jury ruled it caused a driver to be negligent.

In Sag Harbor, New York, it is illegal to take your clothes off in your car. The penalty is a fine of up to $100 and/or jail time up to three months.

It is illegal to roller skate on the streets of Canton, Ohio. That section of the Canton code also applies to “any coaster, toy vehicle, skateboard or similar device.” The penalty is a fine up to $1,000 and up to six months in jail.

In Oregon, it is illegal to leave a vehicle door open on the side of traffic, pedestrians or bicycles “for a period of time longer than necessary to load or unload passengers.” The penalty is a fine of $90 and possible jail time.

In Hilton Head, South Carolina, it is illegal to store trash in your car.

Specifically, that section of the code states that it it’s unlawful “to place, leave, dump or permit to accumulate any garbage, rubbish or trash in any building, vehicle and their surrounding areas in the town so that the same shall or may afford food or harborage for rats.”

A violation is consider a public nuisance and is subject to a fine of up to $500 and/or jail time of up to 30 days.

Drinking and driving is okay in Costa Rica! Sipping a beer – without getting drunk – is fine even while you’re behind the wheel. Your blood-alcohol level can’t be more than .05, though, or else you’re in big trouble.

Do you happen to know any other strange driving laws from around the world? Let us know in the comment box below.

*The above compilation of driving laws has been carefully compiled with references to accredited sources. There are more strange driving laws, however, we have not added to the list as we are unable to find accreditation by the country’s traffic authorities.