The Race Against Climate Change: Impact to Singapore

In the recently-concluded World Economic Forum at Davos, Switzerland, United Nations Secretary-General Antonio Guterres had a sombre message for global leaders: climate change is “the most important global systemic threat in relation to the global economy”. He added, “Climate change is running faster than we are. I believe we are losing the race.”

Our planet’s climate has always been continually changing over time. Although the global average temperature today is about 15°C, geological evidence suggests it has been much higher and lower in the past. However, the current period of global warming is occurring more rapidly than many past instances and scientists are concerned that the natural fluctuation in climate is being overtaken by a rapid human-induced warming. Needless to say, this has serious implications for the stability of the planet’s climate which we depend upon more than we realise.

To address this pressing issue, international action to follow-up on the Paris climate agreement took place in earnest in Katowice, Poland in December 2018. While the Katowice conference delivered a milestone rulebook following on from Paris, it failed to spur greater national efforts to slash carbon emissions. The 195-nation pact calls for capping the rise in Earth’s temperature at “well under” 2°C, and at 1.5°C if possible. Even if fulfilled, these promises will see temperatures rise more than 3°C above pre-industrial levels, a recipe for global chaos, according to scientists. Worse still, based on current trends, the increase would be even greater.

What is the world looking at if these efforts at curbing climate change are not successful? What are the effects of climate change?

The rise of global temperatures is a major climate effect. Earth’s average surface temperature has risen about 0.9°C since the late 19th century, a change attributed largely to increased carbon dioxide and other human-made emissions into the atmosphere. Of concern is that most of the warming occurred in the past 35 years, with the five warmest years on record taking place since 2010.

Global warming is likely to be the greatest cause of species extinctions this century. According to the United Nation’s Intergovernmental Panel on Climate Change (IPCC), a 1.5°C average increase in temperatures may place 20 to 30% of species at risk of extinction. If the planet warms by more than 2°C, most ecosystems will struggle. Research from the World Wildlife Fund says that the world’s threatened species live in areas that will be severely affected by climate change and that change is happening too quickly for many species to adapt. 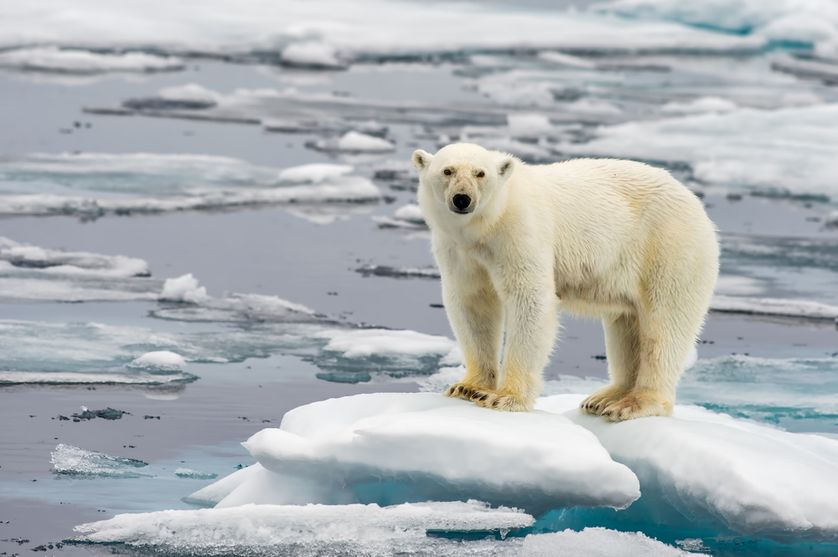 Climate change is amplified in the Earth’s Polar Regions. Earth’s north and south poles are crucial for regulating our climate and are particularly vulnerable to the impacts of global warming, which has global consequences. As a case in point, average air temperatures in the Artic have increased by about 5°C over the last 100 years, while recent data shows that there will be almost no summer sea ice cover left in the Arctic in the next few decades. The effects of this will not be felt just by the habitats and species that rely on this area, but throughout the entire northern hemisphere.

The oceans too are affected. As vital ‘carbon sinks’, they absorb huge amounts of carbon dioxide, preventing it from reaching the upper atmosphere. Increased water temperatures and higher carbon dioxide concentrations than normal make oceans more acidic. This does not give marine life, which evolved over millions of years in an ocean with a generally stable pH, much time to adapt. The shells of some animals are already dissolving in the more acidic seawater, which is just one way that acidification may affect ocean life. Overall, ocean acidification is expected to have dramatic and mostly negative impacts on ocean ecosystems.

Scientists are now increasingly confident of the link between climate change and the increase in extreme weather events. Incidents of extreme heatwaves, wildfires, storms and floods wreaking havoc around the globe are considered “the face of climate change,” according to one leading climate scientist. Extreme weather has struck from the Arctic Circle to Greece in Europe, and North America to Asia. In 2018, temperatures in China reached 40.3°C, the highest in 50 years, with millions affected by flooding of the Yangtze in southern China due to heavy rainfall.  India too endured floods in 12 states last year that killed thousands, damaged over 55,000 homes and destroyed over 81,000 hectares of agricultural land.

The effects of climate change such as storms, floods and droughts are threatening global food security. Singapore is particularly vulnerable to fluctuations and disruption in global food supply and prices, given that it imports more than 90% of its food.

How is Singapore Affected?

In the short term, Singapore will literally feel the heat of climate change owing to increases in average temperatures. This is underscored by the fact that 13 out of the past 15 years have been the warmest in Singapore’s historical record since 1929. Factoring in future global GHG emissions, climate modelling projects further average temperature increases of between 1.4°C and 4.6°C, as well as more frequent warmer days and nights by 2100.

These temperature changes are partly down to the local “heat island” effect directly resulting from Singapore’s urban landscape. The replacement of Singapore’s natural forests with buildings and other infrastructure results in built-up surfaces retaining or producing considerable amounts of heat.

Unlike the temperature, Singapore’s average total annual rainfall of about 2.4m has not changed significantly since 1869. And In future, climate change is not expected to alter total annual rainfall for Singapore. However, changes to rainfall patterns – too much or too little precipitation – will be an issue in the medium term of the next 30 years. The intensity and frequency of local rainfall events have significantly increased over the past 30 years. Periods of meteorological drought, where monthly rainfall is consistently below average, have also been more intense.

The most severe climate impact Singapore faces in the next 50 years and beyond is sea level rise. The average sea level around Singapore has gone up steadily at a rate of between 1.2mm and 1.7mm annually, and is projected to increase to about 1m by 2100. Even though the scale of these increases may appear to be small, sea level rise is of great concern for two reasons. First, there are uncertainties about future projections with regards to the melting rates of land ice in regions such as Greenland, which in turn could affect Singapore. Second, while Singapore has implemented coastal policies in advance to adapt to rising sea levels, neighbouring countries that Singapore depends on for food supply and trade are much more vulnerable to rising sea levels.

Never one to wait around, authorities in Singapore have undertaken a number of measures to prevent and mitigate the impact of climate change in areas such as heat vulnerability, sea levels, flood protection and food security.

In order to reduce its vulnerability to heat, Singapore cannot depend on natural variations in climate such as an anomalous spell of cool weather. Instead, a proactive approach of having integrated climate-sensitive urban designs is one solution. One such project towards this is the Cooling Singapore initiative, a collaboration between academic institutions, which has an illustrative guide of heat island adaptation methods such as how to maximise shade, enhance natural wind flow and increase urban green spaces.

Singapore is also taking steps to strengthen its defences against rising sea levels. A first-of-its-kind study commissioned by the Building and Construction Authority will form the national framework for coastal protection measures. Singapore has already adopted various strategies to cope with coastal erosion and flooding as sea levels rise. These include raising minimum land reclamation levels from 3m to 4m above mean sea level, and the installation of hard walls or stone embankments in at least 70% of Singapore’s coastal areas.

On the specific impact of floods, climate change has meant more unpredictable weather and flash floods. During the wet season or spells, the national water agency PUB issues advisories to those in low-lying, flood-prone areas. It also offers sandbags on request to help residents and businesses guard against floodwaters entering their premises. PUB carries out round-the-clock online flood monitoring using water level sensors and CCTV cameras, while a Quick Response Team is on standby during the monsoon season to check drains for chokes and render assistance during flash floods.

Climate change is inextricably linked to agricultural yields and food security, a particularly important matter for Singapore. To that end, a new dedicated government agency, the Singapore Food Agency, will be set up to oversee food safety and security. New measures may include requiring importers of key food items to have plans to mitigate the impact of food supply disruptions. This would help improve food security and resilience given the impact of climate change on the food landscape.

Although the race against climate change is long and difficult, it is one which Singapore and the rest of the world must come together to win, for the sake of the planet and future generations.